Today, May 7, 2017 I rode my bike on the Nashua River rail trail, from Ayer, MA to Pepperell, MA, a distance of 8 miles.  During this ride, which took 1 hr. 33 minutes in total, to ride to my destination and return, I tried to remain mindful of the experience.  Here are some thoughts as I reflect on my ride, about 2 hours later.

Colors.  The photo above captures many of the colors I saw today.  On the left you can see the brown leaves on the ground, which darken as they are in the shade.  The tree trunks are very dark brown, almost black.  The grass along the trail is not yet green, but the leaves on the trees and the vegetation have many shades of green, especially the pine or spruce trees that are scattered around the trail.

The photo below captures the brilliant green of the water grasses.  Riding along this water, I skidded to a halt.  I backed up and took this photo.  The green against the darkness of the water pulled me in.  The dark green pine trees in the background help to make the bright green grass in the foreground leap out of the photo, the same way this scene lept out of the landscape as I was driving by.  The green of the grass almost made my eyes hurt.  The sun had come out at this point and I moved quickly to capture the sun on the grass so I could capture it in a photo. 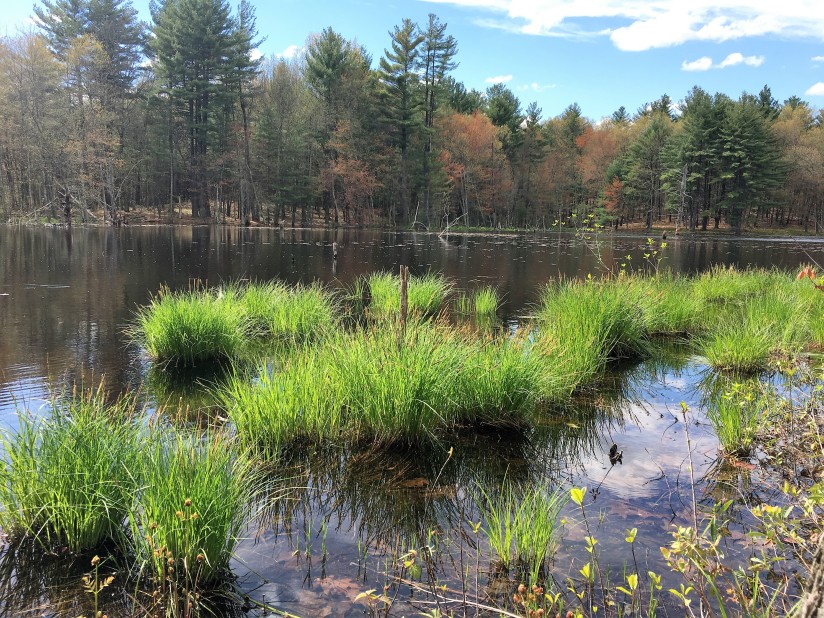 I love to look to the side when I am riding my bike, altering my perspective.  The trees rush past, but only the trees in the foreground.  The trees in the background pass by more slowly.  I was in the moment when I was looking to my sides as I was riding today.  I was aware of what I was doing and I was aware of how the landscape was moving past me.  I looked on both sides, deliberately.  I peered into the wooded areas, looking for anything out of the ordinary, an animal, an unusual shaped rock or bush, anything.  I did not see any animals but I did see a few trails, perhaps trails used by wildlife.

When I was taking the photo above of the bright green grasses in the water, something splashed in the water right in front of me.  A frog or a fish I suspect.  It reminded me of the wonderful and various life forms in and around of us on the trail.  I took the following photo on the trail as a sort of teaching moment, a bold reminder that we are in a special place.  We need to be sensitive to our surroundings. 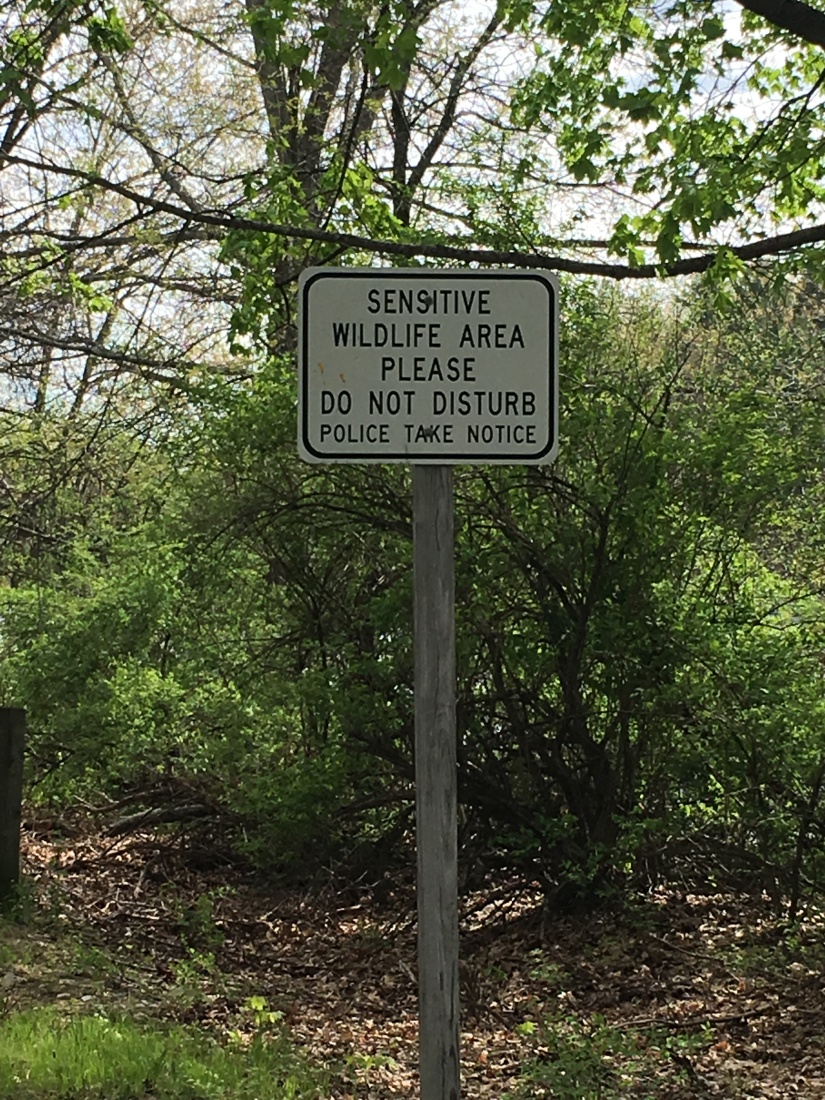 Temperature.  I was chilly when I started about 2pm.  It was 66 degrees under mostly cloudy skies.  I had a thin long-sleeve jersey over a t-shirt.  Not enough.  I almost turned around, but decided that I would eventually warm up, which I did.  The chill I felt for the first 2 miles definitely distracted me from being mindful about the entire experience of riding.  Even so, I was very aware of my discomfort.  So I learned this about myself.  If I am physically uncomfortable, a mindful practice may be elusive for me.  I will have to try harder in those situations.

Wind.  The wind today was a constant companion.  I felt its strength on the ride to my destination.  It was behind me the entire way.  I pedaled almost continually, the entire 8-mile distance, coasting only a handful of times.  My body felt strong, however looking back, the strength I felt in my body had clearly been augmented by the tail wind that was helping me along.  I discovered this fact on the way back, because on the way back I was headed into the wind.  And it slowed me down…considerably.  In fact, what took me 42 minutes with the wind at my back, took me 55 minutes to return headed into the wind.  I also noticed the gears I used were different.  On the way to Pepperell, I was in the 8th gear (harder), most of the way.  On the way back to Ayer, I was often in the 3rd, or 4th gear (easier) and did not get higher than 5.

Historical Perspective.  The Nashua River rail trail follows the former railroad route that ran from Worcester, MA to Portland, ME.  I know this because there are many granite markers along the route, preserved by the trail committee.  Below are photos of the same marker from different views.  At this particular spot, Portland is 118 miles away to the north, while Worcester is only 29 miles away to the south.  I have heard that conductors would use these markets to gauge the distance during their ride. 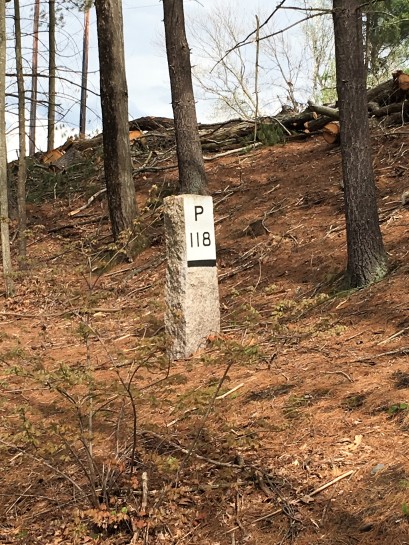 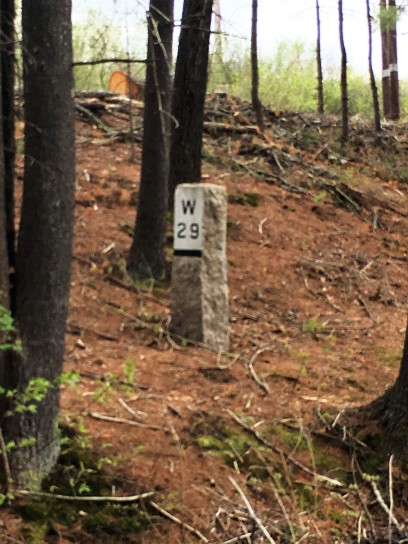 Water.  Not surprisingly, there was a lot of water along the Nashua River rail trail.  Here are a few photos of the water views from the trail. 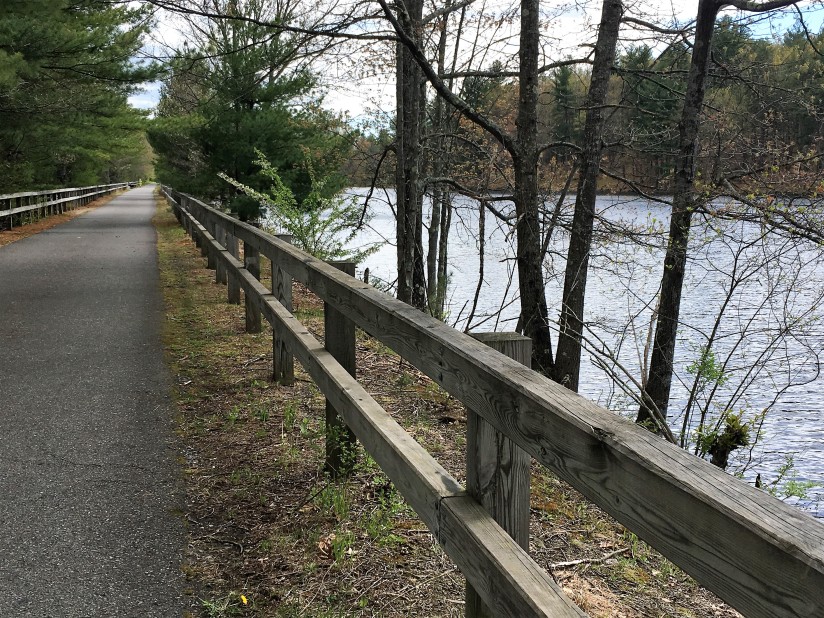 In the photo above, I am heading south on the return to the trail head in Ayer, MA.  This is a great stretch because the trail bisects this body of water.  A few moments after I took this photo, while riding again, the water became visible on my left.  This is a favorite place for walkers and cyclists to stop and rest and perhaps catch a glimpse of a bird, or duck or the splash of a fish.  It is interesting to me how water seems to attracts both wildlife and people, drawing us all in.  I took this photo because of the juxtaposition of the straight, horizontal line of the fence, with the vertical line of the trees, highlighted by the water in the background.  I also liked how the fence on both sides of the trail seemed to vanish in the distance as they appeared to move close to each other. 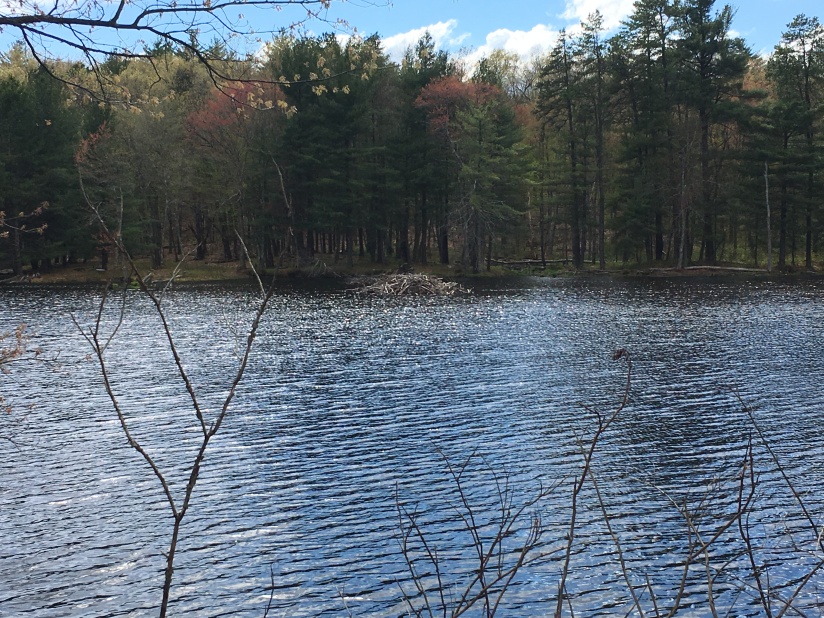 In the photo above, you can see a beaver home in the middle of the pond, which is common site in New England.  I was drawn to this view because of the ripples on the water, making the pond come alive with movement.  The sun glinting off the water also caught my attention as I was riding.  I only noticed this because I was deliberately looking to the side as I was riding today.  This helped me to be mindful as I practiced being a careful observer. 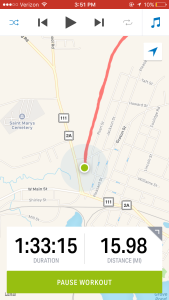 At the end of my ride, I checked the app on my phone, which you can see in the image on the left.  It shows that I traveled almost 16 miles in 1 hour 33 minutes.

It was a fun ride.  When I finished, my body felt good.  I felt both physically tired and emotionally exhilarated.  My senses felt ‘full’ from the experience.  I had seen, heard, felt and smelled many different things during the 93 minute ride.

I drove home with a smile on my face, my tired body sitting heavily in the driver’s seat, with my bike standing upright and swaying gently behind me in the rack on the bed of my truck.

I am a nature artist and community arts practitioner. My art attempts to straddle the liminal zone, that interesting boundary between mindfulness, nature and art. View all posts by petecormier