There’s been a lot of activity in the new homestead during the past week with the wall removal project.  I took delivery of about 300 lbs of milled southern yellow ‘heart’ pine  on Monday, February 12.  The biggest piece pictured below is the beam, which measures 6″ X 10″ by 11 feet long and weighed about 200 lbs.  It took 3 of us to carry it in.  The black plastic piece at the end is a handle that was attached with several long screws to help with lifting.

Southern yellow pine is also referred to as longleaf pine.  On wikipedia I learned this pine is native to the Southeastern US, and found from Texas to Virginia, extending into Florida.  It reaches a height of more than 100 ft. with a diameter of 28 in. In the past, before extensive logging, they reportedly grew to more than 150 ft with a diameter of about 4 ft!  In the late 1800’s, these virgin timber stands were prized for their strength and sadly as a result of clear cutting, they have been reduced to less than 5% of their presettlement range.  Below is a photo of one of the few longleaf pine forests in existence.

Above is a photo of the piece cut from the end of the beam.  It is hard to say how old this tree was.  The rings of this partial cross-section shows about 75 years of growth, but it seems clear that the tree’s diameter exceeded the visible rings.

I learned from Nate at the sawmill that this wood was recently reclaimed from the McLean Hospital in Belmont, MA, which was built in 1892.  McLean was the first psychiatric hospital to establish basic and clinical laboratories to study biological factors in mental illness.   It is gratifying to know that this wood has been reclaimed to be reused in a meaningful way.

Jim spent the first 2 days of the week constructing staging on either side of the existing wall.  The purpose of this is twofold: to hold up the second floor while the existing wall is removed and to support the beam that will be hoisted up in place of the wall.  In the pic below, note the darker wood is the original wall and the lighter wood is the staging.  Jim used a hydraulic jack to make sure each vertical post of the staging was completely engaged in supporting the second floor.

On Wednesday after the original wall was removed and after an electrician moved all the wires, the beam was slowly raised into position. Jim and Doug used the staging to support the beam as it was raised about 18 inches at a time.  In the pic below, the beam is about 3 feet high.

In the photo below the beam is now head high, about 4 inches below the ceiling joists.  The hydraulic jack was then put to use to jack the beam up the rest of the way.

In this view, the beam has been fully raised and is flush against the second floor joists.  It is supported by two vertical 2 X 4’s and 2 horizontal 2 X 4’s held up by the staging.

The raising of the posts came next, which was the most fascinating part of the project for me.  The posts were milled to be 5 1/2 inches X 5 1/2 inches by 8 ft long.  The posts were cut to the exact length they needed to be and then inserted partially into holes cut into the floor.  I say partially, because they could not be inserted completely into position due to angle of the posts and the presence of the beam.

The hydraulic jack was then used to jack the second floor of the house up between 1/2″ and 3/4″ of an inch, to allow the post to slip into place under the beam.  The jack was then used to gently lower the beam on to the post.  This process was done for each post.  Here is a photo of the right post after it slipped into position.

And here are a few shots of the newly raised posts and beam. 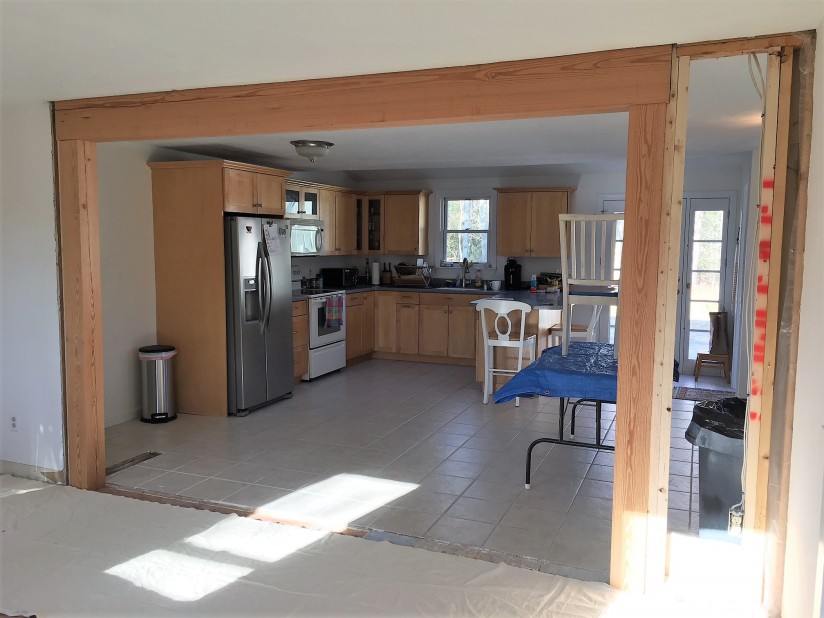 Next part: installing the threshold and the fireplace mantel, both made out of the same southern yellow pine.

Pete Cormier, Ph.D. is the founder and executive director of The Awareness Project, Inc. a nonprofit that seeks to demystify, promote and increase accessibility of mindfulness practices through collaborations and art-making. Find out more at www.theawareness.org. View all posts by petecormier